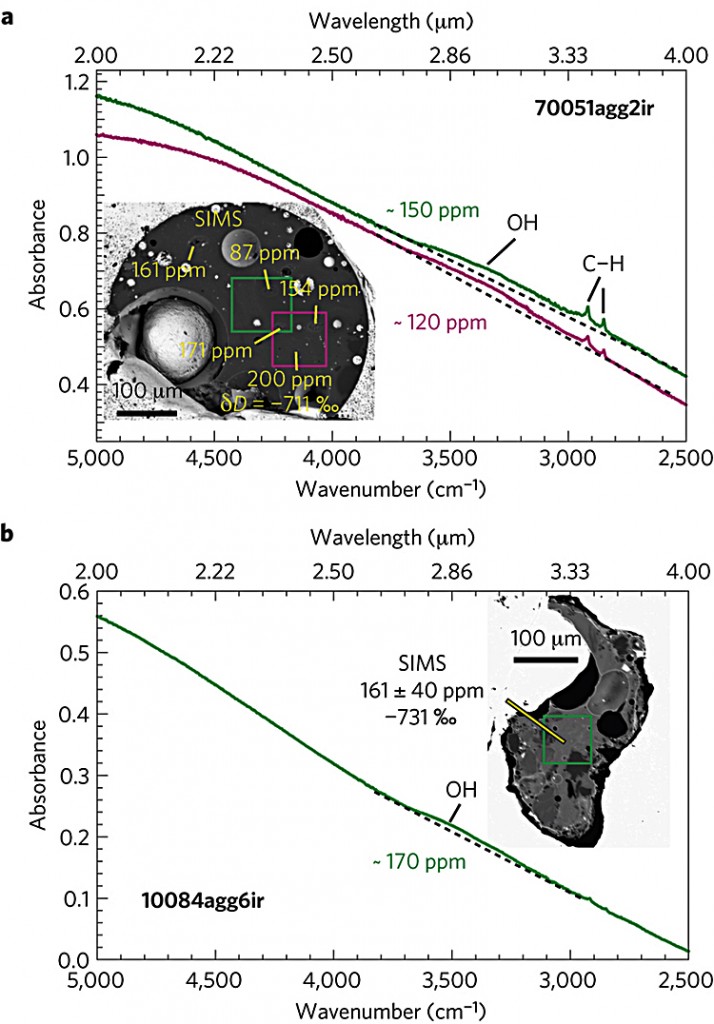 Direct measurement of hydroxyl in the lunar regolith and the origin of lunar surface water.

FTIR spectra and SIMS data of two agglutinates. Each coloured square box on a sample corresponds to a spectrum of the same color. The dashed lines are the linear fit of the continuum (background) of the spectrum. Lunar Mare Basalts and Highland Rocks. Concentration estimates using FTIR absorbance are labelled next to the spectra. The sharp absorption peaks around 2900 cm -1 for C-H bands are possibly organic contamination attached to exposed vesicle walls, although it cannot be ruled out that the C-H bands represent genuine lunar signatures. The 2 signa uncertainties for SIMS H contents and D/H compositions are estimated based on repeated analyses of standards, fitting errors and counting statistics. Samples come from Apollo 17 soil 70051 (a) and Apollo 11 soil 10084 (b).

Since the first Apollo samples were returned from the Moon (before you were born, for most readers), Prof. Taylor’s enthusiastic study of lunar rocks and soils continues to this day at a high pace, adequately funded by NASA. The lunar studies are work-intensive, involving rocks from both the six U. S. Apollo and the three Soviet Luna missions, as well as recently discovered lunar meteorites. Yet, considerable new knowledge on the evolution of the Moon’s crust is forthcoming every year, particularly with regards to the nature of the lunar mantle and crust, the petrogenesis of the various mare basalts, and the origin and evolution of the highlands’ lithologies.

It is the surface coatings of heavenly bodies, their regolith and soil, that are seen by the reflectance spectra, not the rocks. And the soils on airless bodies are the direct result of ‘space weathering’. The Lunar Soil Characterization Consortium, which Taylor coordinates, is actively using the mare and highland soils as ground-truth for dicyphering lunar reflectance data. These studies, in collaboration with colleagues at Johnson Space Center and Brown Univ., are providing critical refinement on this major method of remote sensing. In addition, these detailed mineralogical and chemical characterizations form the basis for revolutionary new insights into the formation of lunar soils.

It is now realized that rocks can be ejected from the Moon and Mars, only to land on Earth as meteorites. Taylor has a collaboration with several Russian meteoriticists from the Vernadsky Institute funded by a NASA grant. The Russians search for meteorites in the desert areas of Oman; they have been successful in finding many lunar and Martian meteorites, which they bring to Taylor’s Labs for study. This has opened up a whole new source of these invaluable samples.

With the recent surge of enthusiasm concerning the possibility of a lunar base leading to a permanent human presence on the Moon, Professor Taylor has become involved in evaluations of resource potentials on the Moon, the production of lunar simulants, and the beneficiation of lunar soil for in-situ resource utilization (ISRU). His former experiences in Economic Geology and Materials Engineering have proven valuable here, and he has received two patents for unique processing of lunar soil. These are very exciting times for lunar and Martian resource utilization studies.