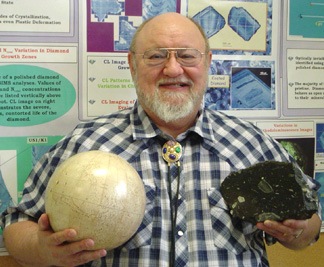 included degrees from Indiana University (B.S., Chemistry; M.S., Geology) and Lehigh University (Ph.D., Geochemistry, Mat. Sci.), with predoctoral experimental petrology research at the Geophysical Laboratory of the Carnegie Institution of Washington. This continued as a Postdoctoral Fellowship at the Geophysical Lab, followed by a Fulbright Fellowship and Humboldt Stiftung at the Max-Planck-Institüt für Kernphysik in Heidelberg, Germany. After 2 years as Asst. Professor at Purdue University, I came to Tennessee in 1973 as UT embarked upon its thrust into research.

Although originally starting as an economic geologist/experimental petrologist, the return of the first Apollo samples from the Moon played a major role in my research interests and funding. It was the mineralogy, petrology, and geochemistry of these unusual rocks from another world that excited us all. While being in the “back-room” at Johnson Space Center in December, 1972,during the Apollo 17 Mission, I was one of those who directly advised the astronauts on the Moon during their EVAs. Jack Schmitt, the only geologist to go to the Moon and the last person to step onto the Moon, and we subsequently became good friends, and he often visits UT. These missions to the Moon were supposed to be but the beginning of human exploration of the Moon, but alas …. Having continuously studied lunar rocks and soils since the early times, with grateful aid from NASA, I consider myself a true “lunatic”. More recently, my efforts have expanded into meteorites. The many new lunar and Martian meteorites being found in the Antarctic and equatorial hot deserts have provided renewed interest and excitement for these heavenly bodies.

In addition to planetary samples, I also have an active research program on terrestrial mantle samples and diamonds. My NSF-funded research on diamonds, their mineral inclusions, and the host rocks for the diamonds has focused on diamondiferous eclogites from Yakutia, Siberia. These samples are unique world-wide, and present us with the opportunity to address the origin of diamonds, as time capsules with pieces of information on the deepest portions of our Earth. My 3 Postdoctoral Fellows, 4 graduate students, and I split our research interests between planetary and terrestrial topics, always “keeping one foot on the ground”, so to speak, and have published >300 refereed papers and books on these endeavors.

As Director of the Planetary Geosciences Institute here at UT, I am particularly interested in our exciting space outreach efforts. Funds that UT obtains from the NASA-sponsored Tennessee Space Grant Consortium are used especially for student scholarships in space science and engineering and our Teacher’s Resource Distribution Center for service to K-12 teachers of Tennessee. These funds facilitate our extensive space outreach efforts, reaching an estimated 10,000-12,000 students and teachers, largely in grades 6-12, public organizations (e.g., Lions, Kiwanis, retire homes), as well as StarWatch sessions each clear night, open to the public with telescopes atop the Nielsen Physics Bldg (see Tennesse Space Grant Consortium at UT) .